The Best Croissants This Side of Paris

People who live in Seattle seem so healthy. All those hills to walk up. They have dogs that need to pee on those hills. They hike in the Cascades, and boat on Lake Washington. They ride bikes or walk everywhere. It’s easy to drive around Seattle, because nobody else does.

But if I lived there, I would be soooo fat. And here’s why: 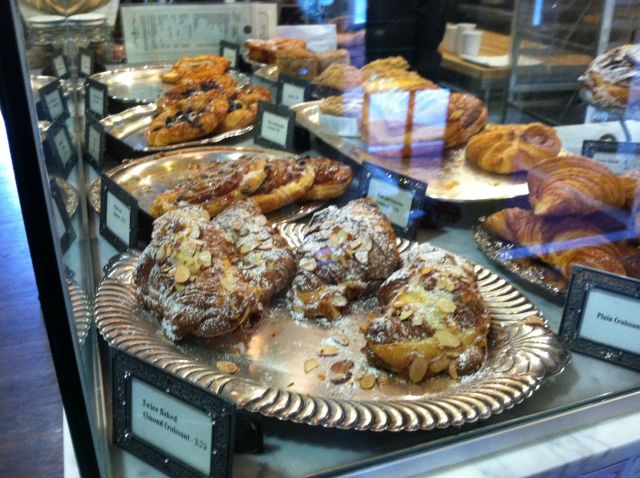 The pastry case at Le Rêve Bakery & Café in Seattle

That’s the pastry case at Le Rêve Bakery & Café in Seattle’s Queen Anne neighborhood, and those are twice-baked croissants in the European tradition. None of the puffy pillows

of nothingness that typically pass for croissants in the US; these are croissants (probably from the day before) that are sliced horizontally and slathered with almond paste, then often with more almond paste on the top, sprinkled with slivered almonds, then rebaked before a final showering with powdered sugar. Regular croissants are decadent enough done this way, but when you take a pain au chocolat and slather on the almond paste … Ooh la la!

I consider myself a croissant snob. While I try to be open-minded about wine, I can tell at a glance whether a croissant will have “shatter,” that crispy, flaky texture that crackles when you bite it. The puffy American version tends to be too light in color and looks like it might float off the plate. 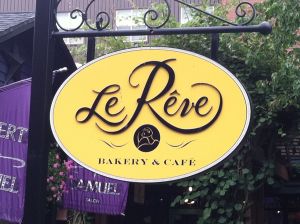 Good croissants are already loaded with butter, of course, and almond paste is primarily almonds, butter and sugar. So these are caloric monsters, and Le Rêve does concede to American preferences with the size of their croissants. But I wasn’t complaining. The twice-baked pain au chocolat was simply the best croissant I’ve ever had in the United States.

Le Rêve also serves lunch, though you may not need one after eating one of these croissants. The place was recommended to me by Bonnie Benwick, deputy food editor of The Washington Post, who enjoyed a sandwich there on her recent Seattle sojourn. Their short wine list also features Barone Fini Pinot Grigio, one of my favorites, though I stuck with a skinny latte. (One has to economize on calories where one can.)

I was in Seattle all of six mornings on my recent trip. I went to Le Rêve three of them. Yes, it’s that good.

Thank goodness I had to hike up that hill to get there.

Wine columnist for The Washington Post, co-founder of DrinkLocalWine.com, and blogger at Dave McIntyre's WineLine (dmwineline.com).
View all posts by Dave McIntyre →
This entry was posted in Food and Drink, Washington Post and tagged Food, Pastry. Bookmark the permalink.

6 Responses to The Best Croissants This Side of Paris