Worth reading this week

In my continuing quest to come up with a regular pattern of posts that can make it easier to keep feeding this blog and also give you readers some consistency about what to expect when you visit, I thought I’d pass along some links to interesting blog posts and news articles about wine and whatever. I’ll know by the number of hits and the number of clicks on these links whether it’s worth continuing …. 😉 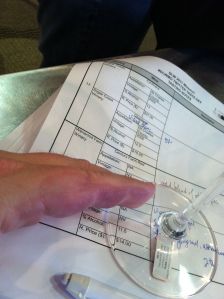 @1WineDude, Joe Roberts discusses the message in a wine’s color, but wonders if wine critics aren’t wasting points on this category. After all, a “light” red or a “dark” white can still taste wonderful. Here’s a quote:

For better or worse, as wine drinkers we’ve accepted and established a wine-color standard (or, at least, we’ve let the most influential wine critics establish a standard), but like the current woeful state of airline travel service, or the proliferation of high alcohol fruit-bomb wines, this might not necessarily be the standard that we need.

Wine contests that I’ve judged typically assign two points out of 20 to color, and judges assume these are gimmes, unless of course the wine is obviously flawed (like, flotsam and jetsam in the glass). There’s good discussion in the comments to Joe’s post, including an amusing treatise by Doug Wilder on the importance of water color when he’s taking a shower.

I got a hankering for beer when I read the mouth-watering beer-food pairings suggested by Teddy Folkman, chef of Granville Moore’s Belgian Beer and Gastropub in DC, as reported by Metrocurean.

I hope you like Prosecco – Decanter.com reports that the Prosecco DOC will “grow fivefold” by 2035. They already make 220 million bottles of the popular fizz, and target production of 1 billion. That means it would take only seven years for them to make one bottle for every person on earth. Sort of …

Over @wine_curmudgeon, Jeff Siegel reviews George Taber’s new book, A Toast to Bargain Wines. Elsewhere, Jeff points us to a Slate article called “Drink Cheap Wine.” Both Taber and Brian Palmer, the Slate author, fall into the popular fallacy that just because people who know something about wine get their Burgundies and Bordeaux mixed up in blind tastings, we should all just drink cheap crap. Taber, of course, chronicled the most famous of blind tastings, the 1976 Judgment of Paris; but the message of that tasting was that American wines were qualitatively on a level with the French, not that we should all be drinking Barefoot or Yellow Tail. I feel a rant coming on … 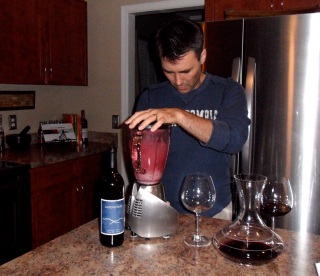 Frank Morgan gets hyper. (From DrinkWhatYouLike.com.)

But to end on a lighter note, I commend to you this post Frank Morgan published last month on DrinkWhatYouLike.com, in which he celebrated Virginia Wine Month by putting a Virginia Cabernet Franc through the torture of “hyperdecanting” in a blender. He was testing Nathan Myrvhold’s technique of “aerating” a wine as recommended in Myrvhold’s $625 cookbook, Modernist Cuisine. It’s enough to make a traditionalist out of the most avid iPhone user.