My Favorite Regional Wines of 2011

The blahblahsphere is rife with posts about the best wines of the year, so I thought I’d offer my favorite “Regional Wines of 2011” – these are wines that thrilled me this year, and yes, I may have graded them somewhat on a curve because they are “from around here, wherever here happens to be.” Many of them are from Virginia, because that’s the region I taste most often; but I do feel this prominence demonstrates that Virginia wines are reaching a quality level to justify the state’s inclusion in the phrase, “Wine Country.” Here’s my case of Regional Wine for 2011:

#12: Barboursville Vineyards Petit Verdot 2008, Virginia. When I visited Barboursville in 2007, I asked winemaker Luca Paschina what he thought of the trend toward Petit Verdot in Virginia. He dismissed it with a comment along the lines of, “There’s a reason they use it as a blending wine in Bordeaux.” When I reminded him of this after he won a Gold Medal for his 2008 PV in the Governor’s Cup competition a year ago, he more or less shrugged and sent me a sample. Wow. This was dense and rich, tightly focused, showing the aromatic qualities of the grape but keeping it well-grounded and impressively structured. I wish I had a case of this to enjoy over the next decade.

#11: Virginia sparkling wine. This is a category endorsement, as every year I continue to be impressed with the quality of fizz bubbling up in Virginia. Scintilla, a slightly off-dry sparkler from Veritas Vineyards; Kluge Estate/Trump Winery’s line of sparklers; and of course Thibaut-Janisson are leading the way.

“This is the type of wine I love to discover when traveling – something I’m not likely to find anywhere else. It’s everything that ‘regional wine’ and ‘drink local’ are all about.”

#10: Montelle Winery 2010 Dry Vignoles, Missouri. When DrinkLocalWine.com held its annual bloggers conference in Saint Louis, I expected to taste a bunch of good Missouri Norton, and I did – but it was the Vignoles from several wineries that blew me away. This was my favorite – a richly fruity white wine from a French-American hybrid grape that quite frankly matches vinifera in quality. If you’re ever in Missouri, do not pass up a chance to try it.

#9: Linden Vineyards Late Harvest Petit Manseng 2008, Virginia. I’m a big fan of Jim Law’s wines at Linden, and I could have named several to this list. I am also a big fan of Petit Manseng in Virginia, and could think of more than a few to represent the grape (the Horton 2008 dry Petit Manseng, and Chester Gap’s stellar rendition, for instance). But this honeyed late-harvest version, intense and concentrated with great acidity and focus to balance the sugar, is the one that I kept thinking about this year. 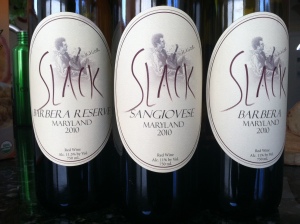 These wines were nice - the Montepulciano was even better.

#8: Slack, Montepulciano 2010, Maryland. This was a new winery for me, part of Maryland’s impressive growth in recent years. Slack specializes in Italian varieties and has a couple of nice Barberas, but the Montepulciano charmed me most – light and silky with bright fruit and a delightful finish.

#6: Red Newt Cellars, Dry Riesling 2008, Finger Lakes, New York. I love New York Riesling, and Red Newt is consistently one of my favorites. I celebrated early this year when Red Newt wines gained distribution in the DC area, and I mourned last summer when Debra Whiting, co-owner and chef at Red Newt Bistro, died in a car accident. I opened this bottle in her honor at our family’s Thanksgiving dinner.

#5: Boxwood Winery, Topiary, 2007. When I led a tasting of local wines last June at the DC Park Hyatt’s Masters of Food & Wine event, the Boxwood Topiary 2007 was the last wine on the list. What a way to end the evening! I loved this wine when it was released two years ago to much fanfare, but it has hit full stride, with lots of smoky black fruit aromas and plummy flavors with a finish that just won’t quit.

#4: Black Ankle Vineyards, Slate, Maryland. This red blend won the 2011 Maryland Governor’s Cup for Black Ankle, this winery’s third in four years. I loved it not just because it was rich, dark and elegant, but because of how it demonstrated the experimental, pioneer aspect of local wine. Proprietors Ed Boyce and Sarah O’Herron had a few barrels of their stellar 2007 reds that just weren’t performing well, so they set them aside in the winery and forgot about them for a couple years. Early this year, they decided to blend them with some remaining 2008 and 2009 wines and produce this terrific winner. Here’s a toast to ungainly adolescents maturing and realizing their full potential.

#3: Ankida Ridge, Pinot Noir 2010, Virginia. The Old Dominion is not supposed to be Pinot Noir country. Most wineries gave up on it and grafted over the vines long ago, though a few stalwarts remain, with mixed results. Ankida Ridge, near Amherst, north of Lynchburg, is “boutique” to the extreme, with only about 2.5 acres of vineyards (about to expanded, but not by much.) What makes it special is the altitude, the steep slope, the soils, the Burgundian clones on proper rootstock, and the extreme dense spacing in the vineyard. Rigorous viticulture, in other words, that makes it unnecessary to pull magic tricks in the winery. (For more on this, see wine #1, below.) This is an intriguing, even exciting wine just because it exists; but it is delicious and will be fun to follow in coming vintages.

#2: Cedar Creek Estate Winery, Ehrenfelser 2010, Okanagan Valley, British Columbia. I purchased this wine on vacation in Vancouver at a store that sells only wine from BC. I’d never heard of the grape, a cross of Riesling and Sylvaner, but I was charmed by its delightful apricot and peach fruit and impressive complexity. This is the type of wine I love to discover when traveling – something I’m not likely to find anywhere else. It’s everything that “regional wine” and “drink local” are all about.

#1: RdV Vineyards, RdV 2008. Rutger de Vink and his showcase winery in Fauquier County exploded onto the Virginia wine scene in March, with extraordinary reviews and some controversy, given its $88 price tag. But the skeptics – at least some of them – tried the wine and many were won over. This is an uncompromising effort to make world-class wine in Virginia, and it’s off to a rip-roaring start.

Post Script: There were also some wines I tasted in 2011 that are not yet on the market, but should be released sometime in 2012. Two of these I’m especially eager to taste in their final form:  In Maryland, Boordy Vineyards Landmark Series reds from 2010 show tremendous promise, the fruit of Rob Deford’s extensive replanting effort over the past five or six years. And in Virginia, Luke and Toni Kilyk will be releasing their first estate wines from Granite Heights winery near Opal. These wines, also from 2010, were terrific when I tasted them in October. You can go now (by appointment) for some of their very nice wines from grapes they grew on leased vineyards – and their honey is delicious, too.

Wine columnist for The Washington Post, co-founder of DrinkLocalWine.com, and blogger at Dave McIntyre's WineLine (dmwineline.com).
View all posts by Dave McIntyre →
This entry was posted in Canada, DrinkLocalWine.com, Eastern US, Food and Drink, Maryland, New York, Riesling, Virginia, Wine and tagged 2011 Best Of, Lifestyle, virginia wines. Bookmark the permalink.

12 Responses to My Favorite Regional Wines of 2011