Posted on September 2, 2014 by Dave McIntyre

Harvest has begun, not just in California but also here in the East. We think of a vine’s growing season as bud break to harvest, but the 2014 vintage throughout much of the United States has been shaped and even defined by what came before — the harshest winter in memory.

I had seen reports of the devastation in wine regions such as Michigan and northeastern Ohio, but I wanted to see for myself winter’s effects and learn how vintners were coping. So last month I went to Michigan’s Old Mission and Leelanau peninsulas (and reported on winter’s effects here) and Ohio’s Grand River Valley, where as late as May many growers were thinking of quitting rather than replanting. But then the vines began to grow, from the ground. There will be no crop this year, and probably little if any in 2015. But the vineyards will survive.

The first Ohio vintner I met was Arnie Esterer, who began planting vinifera vines near the shores of Lake Erie in Conneaut (I learned it’s pronounced Connie-at, as in, “Where’s Connie at?”). This is outside of the Grand River Valley AVA, where several other growers told me it was impossible to ripen Cabernet Sauvignon. I just chuckled, because Arnie’s Markko Vineyard Cabernet was among the best I’ve ever tasted, from anywhere. He poured me his 2010 and a 1991, which tasted almost as fresh. And he is justly proud of his Chardonnay, which he calls Homage in honor of his mentor back in the 1960s, Dr. Konstantin Frank. 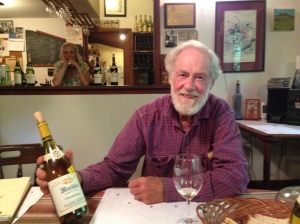 Here’s the piece I wrote for The Washington Post about my visit to Ohio. I mentioned it on social media when it was published, so I apologize for any repeats. But this is an important story about the growth of wine in the Eastern United States, one that cannot be told adequately through weather reports.

Arnie Esterer considered giving up. He and his 45-year-old vineyard had survived the winters of ’94 and ’03, but now the vines were ravaged, reduced to blackened, bare stumps following the record low temperatures that struck the eastern United States in early 2014. There clearly would be no crop this year, and the vines themselves were lifeless.

Until late April. That’s when shoots began to emerge from the ground, giving hope that the vineyard could be revived. So Esterer, the first vintner to plant European vinifera grape varieties along the Lake Erie shore in northeastern Ohio, began training those shoots up the trellis wires in hopes of growing new trunks and cordons that might bear a crop in 2015. Having planted the vineyard near Conneaut in 1968 as a young man and built a cult reputation for his Markko Vineyard cabernet sauvignon, chardonnay and Riesling, Esterer, 82, was starting over.

This year’s severe winter, with its “polar vortex” that brought record low temperatures to much of the eastern half of the country, was devastating to wine grape growers.“Once every 10 years” is a common refrain of vintners describing the likelihood of harsh winters and their effects on viticulture. It echoes a decades-long debate over whether eastern U.S. vineyards should be planted with European varieties or native American or French-American hybrids. The vinifera advocates have won that debate, but they pay the price in years like 2014. Native grapes, such as concord, and hybrids like chambourcin and vidal blanc survived this winter in fair shape.

Esterer was a disciple of Dr. Konstantin Frank, the Russian immigrant who championed the vinifera varieties for the Finger Lakes in New York and other areas along the east coast throughout the 1960s and into the early 1980s. Dr. Frank gave him advice and sold him his initial vines. Today, Esterer makes a stunning cabernet sauvignon in a region where other vintners are still quick to say, “You can’t ripen cabernet here.” His chardonnay, aged for three years before release, is savory and rich, as though the vines managed to transmit a message from deep within the Earth.

A soft-spoken man who is not shy about dropping a few profanities into his discourse, Esterer resembles Robert E. Lee, with his white hair and beard. His winery is essentially a backwoods cabin, where he offers guests a tasting at a rough-hewn wooden table that promotes conversation more than sales. To get inside, I had to pass inspection by two shaggy sheepdogs, one of whom goosed me to check my bona fides. Once there, Esterer produced a notebook full of spreadsheets with data about every one of his vines.

A harsh winter can harm a vineyard in two ways – by killing the buds that form the previous year and carry this year’s crop, and more seriously, by freezing the sap and shattering the vine from within. The extent of damage from last winter is still uncertain. In northwest Michigan, growers on the Leelanau and Old Mission peninsulas along Lake Michigan and Grand Traverse Bay (which actually froze in late February) are expecting to harvest a 2014 crop only 30 percent the size of a normal vintage. Yet these areas have apparently escaped major vine kill, thanks to heavy snow cover that protected the vine roots and the sensitive area where the American rootstock is grafted to the European grape vine.

Winter damage in Virginia was worse than initial assessments indicated, according to Virginia Tech viticulturist Tony Wolf. The true extent of damage may not be known for years. Johannes Reinhardt, owner/winemaker of Kemmeter Wines in New York’s Finger Lakes, remembers the harsh 1985 winter in Germany’s Franken region. “Three years later, when we had the next heavy crop, vines damaged that winter simply collapsed,” he said. Damaged vines may also be susceptible to crown gall, a disease that can eat away at a vine’s nervous system.

No region was hit harder than northeastern Ohio, along Lake Erie and the Grand River Valley northeast of Cleveland. After a mild December, temperatures plunged from 42 degrees to minus 19 over a period of 36 hours in early January, and stayed there for several hours. There was no snow cover to protect the vines. Subsequent cold spells magnified the damage.

“As late as mid-April, we feared an entire growing wine region had been destroyed,” says Donniella Winchell, executive director of the Ohio Wine Producers Association. “Now there’s at least hope for the future.”

Restoring vineyards with the shoots emerging from the roots will not be easy, nor inexpensive. “I’m spending five times as much in labor costs to retrain these vines than if I had planted from scratch,” laments Art Pietrzyk, owner of St. Joseph winery in the Grand River Valley.

At Markko Vineyard, Esterer says he has enough inventory from two productive vintages in 2012 and 2013 to sustain him through a cropless 2014 while he restores his vineyard. “I’m retired, I have nothing else to do,” he says.

Yet he knows the damage could have been avoided, or at least lessened, if he had followed the advice of his old mentor, Konstantin Frank.

“We didn’t mound up enough,” he says, referring to the practice of piling dirt around the vine trunk to protect the sensitive graft union from winter’s wrath. “I didn’t follow Dr. Frank’s rules. After 40 years, I got lazy. I’m the only one to blame.”