Peter Chang is known as the finest Chinese chef in the United States, and one with a sense of wanderlust. He made his name disappearing from restaurant after restaurant in Northern Virginia, Charlottesville, Knoxville to Atlanta, fleeing whenever he was discovered, elusive as the wok qi of a fine stir fry. In the last three years, Chang has returned to Virginia and built a five-restaurant empire that seems to expand faster than my waistline.

After opening restaurants in Charlottesville, Richmond, Williamsburg, Fredericksburg and Virginia Beach, Chang appears ready to return to the Washington, D.C. area. He told me Sunday his next restaurant will be in Rockville Town Square, his first foray into Maryland.

Gen Lee, Chang’s business partner, told me Wednesday they have agreed on a lease for an existing restaurant space. While Chang said the new outpost should open in late September, Lee said October was more realistic.

Chang said he knows Rockville has a lot of Chinese restaurants popular with the local Chinese community, but he hopes his cuisine will appeal to a broader audience. He wants to introduce “authentic” Chinese cuisine to Americans who have become accustomed to Americanized Chinese food. He also intends to open in Fairfax, but Rockville will be first because the space requires less renovation.

Chang’s followers are sometimes skeptical of his burgeoning empire, convinced his mastery cannot be taught to other chefs. I admit to an added satisfaction when I know he’s in the house, but I’ve also eaten at his restaurants when he wasn’t there and always had a delicious meal. And as I explained in that blogpost linked above, I love his food not simply for the spice, but for the complexity and nuance he achieves with his flavors.

I met Chang when I wrote this feature for The Washington Post about his first appearance at the James Beard House in Manhattan, featuring Virginia wines from Jefferson Vineyards. On his subsequent Beard House dinners he featured wines from Trump Winery and ciders from Foggy Ridge. I helped select the pairings for those events.

Learning about his Rockville opening was a stroke of luck. I was in Virginia Beach to visit family and offered to take my Dad to lunch for the best Chinese he’d ever have. As it turned out, Peter was there preparing to cook for a wedding reception that afternoon. My Dad now has a new favorite chef. And I, with a day job just a 10-minute drive from Rockville Town Square, am contemplating an even more expansive waistline. 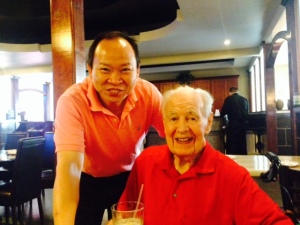