In Europe, winemakers are geologists, while in America they’re chemists. This generalization is as dangerous as any other, but it reflects an important difference in point of view between Old and New World winemaking. The distinction may be blurring, but in the United States you are more likely to evoke an enthusiastic discussion of pH levels than soil types.

Not at Hirsch Vineyards. Perched high above the Pacific Ocean in northern Sonoma County, Hirsch is part of the “extreme” Sonoma Coast, a pocketful of wineries and vineyards hop-scotched on remote hillsides off the Pacific Coast Highway well north of Bodega Bay and above the fog line. This is vineyard land – and wine – created by the primal forces of the Earth’s geology.

“That’s the San Andreas fault over there,” David Hirsch said when I visited his vineyards early this month. He was pointing to a ravine, a valley really, that separated his hills from someone else’s. “Thirty million years ago, this was a geological Mix-Master, churning up a melange of soil types.” As a result, his 72 acres of vineyards, many of them on fairly steep slopes, enjoy a variety of soils that all tend to be rocky and poor, just the type for grape vines.

Hirsch made his fortune in the 1970s marketing affordable clothing for young women to stores such as Gap. By the early ’80s, he was looking for some peace and quiet, and he found this old sheep ranch on the coastal mountains west of Cazadero. California had just enacted strict environmental laws that prohibited the shepherds from poisoning coyotes, making sheep farming untenable. “So I bought this 1,000-acre sheep farm for zilch,” Hirsch says.

Here’s his property before he bought it:

The sheep had basically cleared the topsoil, which had already been weakened by decades of logging to help build San Francisco (and rebuild it following the 1906 earthquake). So the ground was already prepped for planting vines.

The climate along the extreme Sonoma Coast can be problematic, however. “There’s no typical vintage,” Hirsch says. “It can be 100 degrees up here in July, and just 60 degrees on the beach, two-and-a-half miles away, so I don’t consider this a marine climate.”  Wild boar are more of a nuisance than coyotes today. 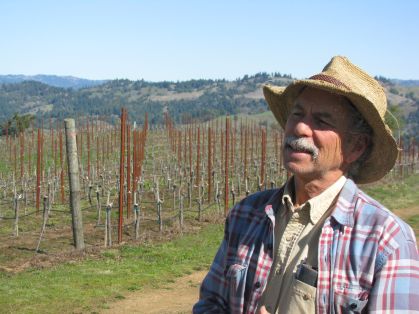 Hirsch’s winery is at the end of an unpaved road, with no sign, no tasting room and no wine country doo-dads for sale. He greeted me unselfconsciously in his farming clothes, including a tattered straw hat and a frayed flannel shirt over mud-stained jeans. He hardly looked like someone who’d been in the clothing business, as he explained his farming practices. (The vineyards are in process of converting to biodynamic farming.)

Hirsch’s current winemaker is Ross Cobb, who formerly worked at Williams-Selyem in the Russian River Valley and Flowers, within sight of Hirsch across the San Andreas, but a half-hour’s drive away along winding roads that don’t seem to want to get there from here. (Cobb also makes highly regarded wines under his own eponymous label.)

And what wines!  The 2009 chardonnay is soft and rich, deceptive with its drinkability but complex and long. The pinot noirs are aromatic with a minerally, floral intensity that made me want to stick my nose in the glass and leave it there to pickle in the perfume. As you’d expect, these are not inexpensive wines – the 2010 Bohan-Dillon Pinot Noir, a delicious first release from this vintage, retails for $32, while the 2009s ranged from $60 to $85. My favorite of these was the 2009 San Andreas Fault Pinot Noir ($65), which is probably the Hirsch wine most widely available. But I also fell for the West Ridge Pinot Noir, which featured bright red fruit flavors, intense yet light, like a high-wire act balanced on acidity and freshness. And just 12.9% alcohol, to boot.

I bet it would go with lamb, if I could just catch one.